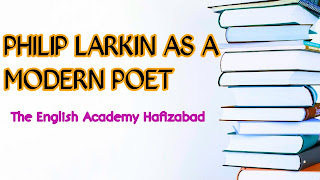 His Agnosticism In Church Going

Church Going deals with contemporary agnosticism. The narrator in this poem is very sceptical about churches. LARKIN‘s dilemma is not whether to believe in God or not, but what a man can replace with God. Though the ‘Church’ is the symbol of faith, peace and purity yet in the modern age people have lost faith in Church. He says:
“Who will be the last, the very / Last to seek this place for what It was.”
And further, he says that:
“Shall we avoid them as unlucky places? “
In the end, one can say that LARKIN belongs to a group of poets who started a poetic movement in England in the fifties of the 20th century, therefore he has set up his reputation as a great poet in modern England yet he is against the techniques of modern poetry and he strongly rejects it. He is a writer of dramatic monologues and uses symbolist element in his poetry. His poems are realistic, objective and conform to the spirit of the modern age as a political and social context of the poems in Less Deceived.

https://drive.google.com/file/d/0B0y-Wp-i-PwjS3FOQVdiMW9Ha00/view?usp=sharing
Instruction: Please Use A-4 Size Paper
to Print All Assignments.
0 comment
0
FacebookTwitterPinterestEmail

MULTI TOPIC ESSAY ABOUT SOCIAL EVILS FOR BA AND BSC