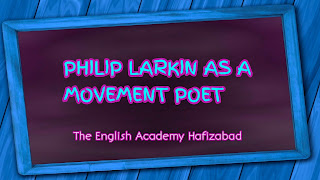 PHILIP LARKIN AS A MOVEMENT POET
The Movement Poetry
The movement poetry stands for a group of poets who were writing their poems in the fifties and sixties of the 20th century. A Dictionary of Literary Terms by MARTIN GRAY defines the term of ‘The Movement’ in these words:
“The Movement to the kind of poetry written by a group of poets in 1950s which was quite different from the modernist poetry. ‘The Movement’ in 1953s for poems written by KINGSLEY AMIS, JOHN WAIN, ELIZABETH JENNINGS, THOM GUM, DONALD DAVIE, and D.J.ENRIGHT. After some time a work of the above poets was published with the name ‘New Lines Anthology’ by ROBERT CONQUEST.”
LARKIN is known as the movement poet. In the introduction to this anthology, ROBERT CONQUEST wrote that these poems were quite different from the poems written in the thirties and forties. This new poetry does not follow the great system or fixed rules of poetry. This new poetry is free from mystical and logical elements. It is most empirical in its attitude to all things.
The Temperate Zone of the Movement
Actually, the poets of the Movement were not an organized group with any well-defined purpose of poetry. Each poet of this group wrote in a different way from the poetry of each member of this group. Even then there were certain features in their poetry. About the common features, LARKIN comments:
“The members of this group did not have many artistic aims in common but that they agreed, in general, in things which they found funny or humorous.”
LARKIN has not given any clear definition of the poetry of the Movement. Talking about his own poetry, he emphasized the expository, documentary, empirical, and rational elements in his poems; and these qualities were evident in the work of other members of the group. While LARKIN gave high praise to the poetry of THOMAS HARDY, he tried to discredit the work of modernist poets such as T.S. Eliot, EZRA POUND, and even W.B. Yeats. Actually, LARKIN had, in the beginning, been deeply influenced by the symbolist poetry of W.B. YEATS and of the French poets of the late nineteenth century.  As a critic views that:
“Larkin’s poetry belongs to a temperate zone”
But subsequently, he tried to shed this symbolist and modernist influence in favor of the kind of poetry that THOMAS HARDY and other traditionalists had written.
The Nature of Modernist Poetry and the Aims of the Movement
The poetry of the Movement aims at stark realism. It is rational, empirical, and argumentative; it employs traditional syntax, using ordinary diction; and it is most often colloquial in style. It employs symbols that tend to make it difficult to understand; it is most often vague in its meaning. It is highly allusive. It is very learned and demands from the reader a high degree of intelligence and vast knowledge. It generally tends to obscurity. The poetry of the Movement seeks to establish a direct relationship between the poet and his audience, and that is why it deals with ordinary and common themes in an ordinary and plain style. Thus one can say that most of Larkin’s poems represent the aims of the Movement and that some of his poems represent the symbolism or the modernist mode of writing. Another critic remarks:
“LARKIN is a middle course between movement and modern poetry.”
Various poems of the Movement  Poetry
The poem entitled At Grass is realistic in every detail. One of the horses is depicted as eating the grass growing on the ground, while another is depicted as moving about and then standing ‘anonymous’ once again. This poem then contains a picture of how these race-horses were at one time the cynosure of all eyes, and how they won the races, thus bringing honor to themselves and financial gain to those spectators who had staked their money on the hopefuls.
The poem Church Going is also realistic in almost every detail. This poem depicts the decline of religious faith and a decrease in the number of people attending church services. Entering a church, Larkin looks around himself and describes everything that meets his eyes, the small neat organ, the fading flowers which had been placed there on Sunday last, the Bibles, and so on. He wonders what would happen to the churches when people have lost their faith completely. He speculates upon the future of these churches some of which might become museums with their display. He says:
“A few cathedrals chronically on show, / Their parchment, plate, and pyx in locked cases, / And let the rest rent-free to rain and sheep.”
In course of time, he says, superstitious women might visit the forsaken churches to look for remedies for the ailments of their children. And thus the poem proceeds in a realistic manner, also employing argument and reasoning. The poem is written in regular stanzas of nine lines each, with nothing innovative or fanciful either about the diction or about the imagery. Although it is a poem about religion and religious faith, there are no transcendental effects or flourishes. Even the final stanza, which acknowledges the enduring value of a certain aspect of the churches, is based on stark common sense. He says :
“Since someone will forever be surprising / A hunger in himself to be more serious, / And gravitating with it to this ground, / Which, he once heard, was proper to grow wise in …”
What is more, the poem is written in a colloquial style which is one of the conspicuous features of anti-modernist poetry. Here, then, is a poem that belongs wholly to the category known as the Movement.

The poem Mr Bleaney is again wholly argumentative and wholly realistic in its imagery and even in its theme. Even the criterion suggested for the judging of the value of a man’s life is based on sheer common sense. The use of irony to links it with the poetry of the Movement. There is nothing in this poem to suggest the symbolist influence. And the most conspicuous feature of this poem is the use of irony. He says:

“How we live measures our own nature”
Here is, then, a full specimen of the poetry of the Movement.
Faith Healing is, again, a Movement poem. Here we have a realistic description of the scene and the event which constitute the main substance of the poem. The diction and the syntax are of the traditional kind, as is the rhyme-scheme. There is also a marked element of irony behind the poem. The words ‘twenty seconds only, scarcely pausing and directing God imply ritualistic and mechanical attitudes instead of an attitude of humility which we expect from a preacher. The use of such words as exiled (from the presence of the evangelist) and losing thoughts is intended as a mockery of the procedure being followed by the evangelist. Furthermore, the poem is written in a colloquial style:
“Now, dear child, /What’s wrong”
Though in some lines the diction does become unusual:
“Their thick tongues blort, their eyes squeeze grief, a crowd / Of huge unheard answers jam and rejoice”
The process called faith healing is well-known to people, not only to the people in the West but also to the Indian people who are even more gullible than the Westerners. So the poem belongs to the Movement more from the point of view of its content than from that of style.
Another Movement poem is Dockery and Son. Here we have an argumentative poem, with logical reasoning about a man’s having a wife and a son, and a man’s not having a wife and a son. The poem is analytical, and more of an intellectual piece than an emotional one. The diction, the syntax, and the rhymes-scheme are traditional in this poem too. The opening of the poem contains a bit, of realistic conversation. The realism of the lines such as the following is also noteworthy:
“And ate an awful pie, and walked along / The platform to its end to see the ranged / Joining and parting lines reflect a strong / Unhindered moon.”
The poem called Water begins like a Movement poem because of the irony behind the poet’s presumption that he might be invited to construct a new religion. There is irony even in the use of the word ‘construct’ and behind the notion of anybody being asked to construct a religion. But the closing lines are obviously symbolic. The poet’s intention to raise the glass of water reminds us of the raising of the chalice by the priest during the Holy Communion. “Any-angled light congregating on the water” in the glass indicates the radiance of both the light and the water on which the light would congregate. This phrase also suggests the essence of all religions because of the consecration of water which is the symbol of life. Indeed,-the closing lines are replete with associations and suggestions, though these are of a vague nature and somewhat mystifying. Here, then, is a poem in which we have a combination of the Modernist and the anti-Modernist elements so that the poem really belongs to the temperate zone of the poetic scene of the Movement.
High Windows is another poem in which a couple of the characteristics of Movement poetry combine with some Modernist ones. This poem has a colloquial beginning, but it ends with symbolic lines. The colloquial manner is obvious in the opening lines:
“When I see a couple of kids / And guess he’s f-ing her and she’s / Taking pills.”
These lines, and some of those which follow contain a realistic picture and realistic thinking.
The poem Sad Steps also has a colloquial opening. The poet says that after a piss, walking back to his bed, he looked at the sky through the window-curtains and saw the moon dashing through the clouds. Then the picture of the moon and the clouds are perfectly realistic. But the Modernist quality of symbolism is found in the lines which follow. The moon is regarded as a medallion of art and a lozenge of love. These epithets for the moon are evidently- Modernist. Then there is the unusual diction: ‘wolves of memory and commencements.’ And then the moon acquires a symbolic significance because its ‘wide stare’ reminds the poet of the strength which he possessed and the pain he experienced during the years of his youth.
Thus one can say that LARKIN belongs to the movement which was shaping itself in the 1950s and it is commonly called “The Movement”. The poets of this movement were quite new in their approach to the purpose of poetry. They were united by a negative determination to avoid that principle and follow stark realism. A more positive trade that bound them together was their detestation of the modernism which EZRA POUND and T.S. ELIOT had ushered into English poetry.
2 comments
0
FacebookTwitterPinterestEmail

I want to be a permanent member