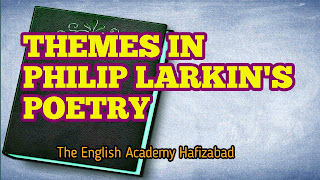 THEMES IN PHILIP LARKIN’S POETRY
Theme is derived from the Greek words “Proposition, Deposit”.  According to A Dictionary of Literary Terms by MARTIN GRAY:
“Theme is the abstract subject of a work, its central idea or ideas, which may or may not be explicit or obvious. A text may contain several themes or thematic interests.”
For example it can be argued that SHAKESPEARE’s King Lear (c.1605) touches upon all the following themes;  rashness, evil, the nature of truth, appearance and reality, kinship, sexuality, ingratitude, selfishness, and so on.
Philip Larkin‘s poetry has a variety of themes: such as religion, melancholy, pessimism, realism, isolation, love, nature, social chaos, alienation, boredom, death, time and sex etc. Some critics have pointed out the narrowness of his range of themes, while his admirers have expressed their praise for his distinctive treatment of these themes but his limited work has unlimited depth. There are many themes in his poetry which are as follow:
i. Religion is the most prominent and dominant theme of his poetry. Larkin has composed his poetry in the context of his temperament and of his personal views on life, religion, and religious dogmas. He shares his thoughts about God, religion and the existing scenario of religious beliefs of different classes of society in one of his poems, ‘Church Going’ in a realistic manner. His poem ‘Church Going’ chronicles the account of that time, when people had become suspicious of the existence of God and religion. Larkin’s sarcasm is seen from the very first line of the poem:
“Once I am sure there’s nothing going on.”
The description of the church would be familiar to anyone who has visited a small parish church in Britain. The layout is typical of the architecture prevalent in the Church of England, with a central aisle flanked by wooden pews with cushioned kneelers and prayer books placed on small shelves on the backs of the pews. An altar rail separates the sanctuary on the east end from the rest of the church. Behind the altar rail, one sees a pulpit on the left, a lectern on the right, and in the centre a large altar or communion table. Large Bibles are normally kept open to the day’s reading from both pulpit and lectern. Although the narrator himself is not an active member of the Church, he nonetheless mounts the lectern and reads the lesson, even closing with the words “Here endeth the lesson,” (which would not be in the Bible itself — suggesting the narrator recalls them from memory) precisely as a lay reader would during a service. He then returns to his persona as a non-religious tourist, dropping a sixpence (roughly equivalent to a quarter in U.S. terms) into the collection box and signing the visitor book. The narrator resolves this contradiction with an understanding that the value of churches and religion lies in what he calls their seriousness, or their long tradition of being a place concerned with the great and meaningful issues of life and death, as opposed to the ordinary and every day. The narrator finally understands his own reason for seeking out churches and the purpose of the churches he seeks in the final two stanzas:
“It pleases me to stand in silence here; / A serious house on serious earth it is, … / And that much never can be obsolete, / Since someone will forever be surprising / A hunger in himself to be more serious, / And gravitating with it to this ground, / Which, he once heard, was proper to grow wise in …”
ii. Melancholy which means “a deep feeling of sadness that lasts for a long time and often cannot be explained”. Melancholy embraces all his themes. This is also the most prominent and dominant theme of his poetry. It is because of his incurable pessimistic attitude. Eric Homberger, in ‘The Art of the Real ‘, describes him as:
“The saddest heart in the post-war supermarket”.
Larkin‘s attitude in his poem “Ambulances” is pessimistic with an atmosphere of pathos and melancholy hovering over it. The poem shows the hollowness and emptiness of a modern man who has no time to show love and sympathy for a sick man, he says:
“And since the solving emptiness / That lays just under all we do.”
That modern man is devoid of sympathy, he only pays lip service to the sick man, but no practical solution.
SEE IMPORTANT QUESTION FOR MA ENGLISH: Click Below Line
IMPORTANT QUESTIONS FOR M.A. ENGLISH PART II

iii. The element of Chaos which means “a state of complete confusion and lack order” and Destruction is distinct in Larkin’s poetry, as his poem MCMXIV(1914).It illuminates the poet’s impression of the post-war world. Larkin fails to come out of the horrors of war. His poetry revolves around the disastrous and chaotic effects of war. He minutely observes the chaotic social, political, economic and theological system. He discusses the chaotic situation in which people were forced to migrate to villages in search of shelter. Larkin sympathises with the lost generation and criticizes at the craze for war.

In the end, one can say that Larkin, being a modern poet, has taken up the themes of religion, melancholy, pessimism, realism, isolation, love, nature, social chaos, alienation, boredom, death, time and sex in his poetry. This approach is quite clear from his treatment of the questions of belief knowledge and perceptions. All these things were necessary because of the conditions of Post War England and also his treatment of these themes is very unique, realistic and convincing.

To read online this Assignment {without outline} or to Download this Assignment { with outline}  and more Assignments in PDF File for print <For better result please use A4 size papers>. Please visit my Website:→ www.teahfd.com  Or search these texts ‘teahfd‘  in Google  Search.
3 comments
0
FacebookTwitterPinterestEmail

seamus heaney as a modern poet?
can u plz send me this question immediately

Thanks for a very interesting blog. What else may I get that kind of info written in such a perfect approach? https://www.hindiloveshayari.in/2019/07/birthday-shayari.html?m=1

This is my first visit to your web journal! We are a group of volunteers and new activities in the same specialty. Website gave us helpful data to work. im academy sign up