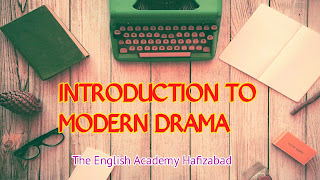 MODERN DRAMA
Submitted By:          Mansib Ali
Drama is a form of literature and it is a play for theatre, radio as well as television in lexical meaning. Metaphorically, it means conflict of two opposite forces. Thematically, it means action. Characters perform assigned roles in the enactment. The stage is the synonym for enactment and drama. Oxford advanced learners Dictionary define drama as:
“Drama is a play for radius, television and theatre.”
The word drama is derived from Greek word “drao” which means “action” ,”play” and “deed”. According to MARTIN GRAY:
“The form of literature intended to be performed usually in some kind of theatre. Drama comes to life when it is interpreted in the performance of actors.”
Apart from this, there are two major types of drama for example tragedy and comedy, and they have some essentials as:
Plot                                       arrangements of incidents and characters
Stage                                    place for action
Characters                       men who performs some roles
Thought                             objective of play
Dialogues                          verbal action
Spectacle                           what is done on stage?
Modernism:
According to Oxford advanced learners Dictionary, the word modern means:
“A new fashion for future time”
Generally, it means advancement, enlightenment, a change from old values to new things. It is some things that does not exist before.
Modernism in literature is a “set of attitudes” The literature written after 1914 is known as modern. It shows a marked difference in themes and techniques from the literature of earlier times. According to MARTIN GRAY:
“The first world war (1914-18) is generally considered to be the catalyst that initiated the modern period in literature. Modernism is a label that distinguishes some characteristics of twentieth century writing, in so far as it differs from literary conventions inherited from nineteenth century.”
After the World War, people have changed their bent of mind. Faith has replaced with reason. Modernism consists of faithlessness, seclusion, nothingness and commercialism.
MODERN Drama is a particular type a drama which depicts modern attributes and shows all the changes that happened on the political, social, economic, religious and psychological level. Faith has replaced by reason, therefore modern drama is rational. It is read and watched; thus it is literary drama.
Features of Modern Drama
Drama is such a genre of literature which is very close to life. Among Greeks, the drama was performed as a religious festival but with the passage of time, there came marked differences in modern times. There are some essential features of drama which are the product of modern literature, they are as followings:
i.            Thematic Concerns: Modern drama is related to thematic concerns. Individual versus society, hypocrisy, instruction, survival of the fittest, destruction, decay and sexuality are the modern concerns and themes of the modern play.

ii.            Literary Drama: Apart from performance and enactment, modern drama is also read and therefore, it is called literary drama. Due to the arrival of press, now, the common man has an access to read drama.

To read online this Assignment {without outline} or to download this Assignment {with outline} and more (F.A, B.A and M. A) ENGLISH Assignments in PDF File. Please visit our Website: → < www.teahfd.com > or search these texts ‘THE ENGLISH ACADEMY BY MANSIB ALI’ in Google. And also follow us on the Facebook page, Twitter and Instagram with single I.D “teahfd”.
0 comment
0
FacebookTwitterPinterestEmail

HOW TO CRITICALLY ANALYZE OF A POEM