Monday, October 18 2021
Trending Now
CHAUCER’S HUMOUR, SATIRE AND IRONY IN PROLOGUE
THE PROLOGUE OF THE WIFE OF BATH
FUNNINESS, INCONGRUITY AND PARODY IN THE PREFACE OF...
CHAUCER’S USE OF IRONY IN THE PROLOGUE TO...
CHAUCER AS A REPRESENTATIVE POET
CHAUCER’S ART OF CHARACTERIZATION
Home LINGUISTICS HISTORICAL LINGUISTICS
LINGUISTICS 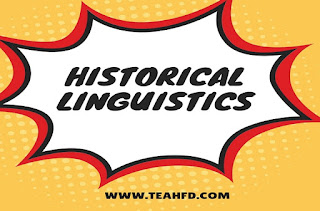 “A chronological record of significant events (as affecting a nation or institution) often including an explanation of their causes or the study of past events.”
Linguistics may be defined as the scientific study of language as it is based on rules. It does not mean the study of many languages but theoretical discipline that shares its border with psychology, philosophy, logic and anthropology. Linguistics is concerned with human language as a universal and recognizable part of human behavior. It has a well-defined subject matter such as natural languages living or dead. FERDINAND DE SAUSSURE (26 November 1857 – 22 February 1913), is a structuralist of Switzerland says about linguistics:
“Linguistics will have to recognize laws operating universally in language, and in a strictly rational manner, separating general phenomena from those restricted to one branch of languages or another”.
Apart from this, the term Linguistic has been derived from two Latin words: Lingua (Language) and Istics (Knowledge/Science). Linguistics dates back to 4th century B.C. Linguistics is the theory that human languages determine the structure of the real world as perceived by human beings, rather than vice versa and that is structure is different and Commensurable from one language to another. NOAM CHOMSKY (7 December 1928-alive in United States), a mentalist, asserts as:
“The study of language that can clarify and in part substantiate certain conclusions about human knowledge that relate directly to classical issues in the philosophy of mind”.
So, linguistics is the science of language. It is the subject whose practitioners devote their energy to understand why human language is the way. It is the study of history, acquisition, structure and use of as many language as possible.
Historical linguistics is the study of development of language over time. How do changes occur in language? What are the causes and effects of these changes? It is primarily the study of languages which are organically related to similarities such as lexicography, morphology and syntax. All these questions fall in the purview of historical linguistics. It aims to classify the world’s language and to study the historical development of language. Longman Dictionary asserts:
“A branch of linguistics which studies language change and language relationships. By comparing earlier and later forms of a language and by comparing different languages, it has been possible to show that certain languages are related, e.g. the indo-european language.”
Etymologically speaking, historical linguistics dates back in 18th century. It was firstly used as scientific discipline in 1777 by FRIEDRICH WOLF. It pinpoints the fact that all languages have derived from past language and past and present languages are interdependent. Oxford Advanced Learner Dictionary, the 9th edition, defines it:
“The study of history and development of language.”
In addition to, one finds out deep relationship between language and history. Both are interdependent. History deals with the role of past events, study of causes and effects is also included in history. Language is a source to describe them. Historical factors affects the use of language.
Assumption of historical linguistics:
There are two assumptions underline historical linguistics. Firstly, linguistics symbols are essential arbitrary. There is no inherent connection between the sounds of the words and the object it signifies. It means that, it is historical linguistics that deals with semantic aspect of language, history gives meanings to words.

To read online this Assignment {without outline} or to download this Assignment {with outline} and more (F.A, B.A and M. A) ENGLISH Assignments in PDF File. Please visit our Website: → < www.teahfd.com > or search these texts ‘THE ENGLISH ACADEMY BY MANSIB ALI’ in Google Search. And also follow us on the Facebook page, Twitter and Instagram with single I.D “teahfd”.