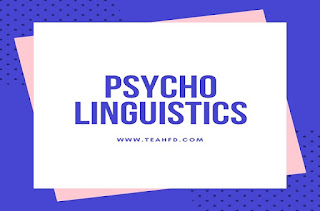 
Psychology is the study of behaviour and mind, embracing all aspects of conscious and unconscious experience as well as thought. It is an academic discipline and a social science which seeks to understand individuals and groups by establishing general principles and researching specific cases. In this field, a professional practitioner or researcher is called a psychologist and can be classified as a social, behavioural, or cognitive scientist. Psychologists attempt to understand the role of mental functions in individual and social behaviour, while also exploring the physiological and biological processes that underlie cognitive functions and behaviours. According to Dictionary of Language Teaching:
Psycholinguistics is the study of the mental aspects of language and speech. It is primarily concerned with the ways in which language is represented and processed in the brain.
The term “Linguistics” has been derived from two Latin words: Lingua (Language) and Istics (Knowledge or Science). Linguistics is the scientific study of language, specifically language form, language meaning, and language in context. The earliest activities in the description of language have been attributed to the 4th century BCE Indian grammarian Pānini, who was an early student of linguistics and wrote a formal description of the Sanskrit language. According to Fourth edition of Longman Dictionary of Language Teaching and Applied Linguistics by JACK C. RICHARDS and RICHARD SCHMIDT, it is defined as:
“The study of language as a system of human communication”.
The term “psycholinguistics” was coined in 1936 by JACOB ROBERT KANTOR in his book An Objective Psychology of Grammar and started being used among his team at Indiana University, but its use finally became frequent thanks to the 1946 article “Language and psycholinguistics: a review”, by his student Nicholas Henry Pronko, where it was used for the first time to talk about an interdisciplinary science “that could be coherent”, as well as in the title of Psycholinguistics: A Survey of Theory and Research Problems, a 1954 book by Charles E. Osgood and Thomas A. Sebeok.


“Psycholinguistics is the study of the mental mechanisms that make it possible for people to use language. It is a scientific discipline whose goal is a coherent theory of the way in which language is produced and understood.”
(ALAN GARNHAM, Psycholinguistics: Central Topics. Psychology Press, 1985)
Psycholinguistics or is the study of the psychological and neurobiological factors that enable humans to acquire, use, comprehend and produce language. Initial forays into psycholinguistics were largely philosophical or educational schools of thought, due mainly to their location in departments other than applied sciences (e.g., cohesive data on how the human brain functioned). Modern research makes use of biology, cognitive science, and information science to study how the brain processes language, and less so the known processes of social sciences, human development, communication theories and infant development, among others. There are a number of sub-disciplines with non-invasive techniques for studying the neurological workings of the brain; for example, neurolinguistics has become a field in its own right.
Psycholinguistics has roots in education and philosophy and covers the “cognitive processes” that make it possible to generate a grammatical and meaningful sentence out of vocabulary and grammatical structures, as well as the processes that make it possible to understand utterances, words, text, etc. Developmental psycholinguistics studies children’s ability to learn a language.
Psycholinguists study many different topics, but these topics can generally be divided into answering the following questions: how do children acquire language (language acquisition)?; how do people process and comprehend language (language comprehension)?;  how do people produce language (language production)?; and how do people acquire a new language (second language acquisition)?
(i) Language acquisition
There are essentially two schools of thought as to how children acquire or learn the language, and there is still much debate as to which theory is the correct one. The first theory states that all language must be learned by the child. The second view states that the abstract system of language cannot be learned, but that humans possess an innate language faculty or an access to what has been called universal grammar. The view that language must be learned was especially popular before 1960 and is well represented by the mentalistic theories of Jean Piaget and the empiricist Rudolf Carnap. Likewise, the school of psychology known as behaviourism (see Verbal Behavior (1957) by B.F. Skinner) puts forth the point of view that language is a behaviour shaped by conditioned response, hence it is learned.
The innatist perspective began with Noam Chomsky’s highly critical review of Skinner’s book in 1959.[ This review helped to start what has been termed “the cognitive revolution” in psychology. Chomsky posited humans possess a special, innate ability for language and that complex syntactic features, such as recursion, are “hard-wired” in the brain. These abilities are thought to be beyond the grasp of the most intelligent and social non-humans. According to CHOMSKY, children acquiring a language have a vast search space to explore among all possible human grammars, yet at the time there was no evidence that children receive sufficient input to learn all the rules of their language. Hence, there must be some other innate mechanism that endows a language ability to humans. Such a language faculty is, according to the innateness hypothesis, what defines human language and makes it different from even the most sophisticated forms of animal communication.
The field of linguistics and psycholinguistics since then has been defined by reactions to CHOMSKY, pro and con. The pro view still holds that the human ability to use language (specifically the ability to use recursion) is qualitatively different from any sort of animal ability. This ability may have resulted from a favourable mutation or from an adaptation of skills evolved for other purposes. The view that language can be learned has had a recent resurgence inspired by emergentism. This view challenges the “innate” view as scientifically unfalsifiable; that is to say, it can’t be tested. With the amount of computer power increasing since the 1980s, researchers have been able to simulate language acquisition using neural network models. These models provide evidence that there may, in fact, be sufficient information contained in the input to learn a language, even syntax. If this is true, then an innate mechanism is no longer necessary to explain language acquisition.


(ii) Language comprehension
One question in the realm of language comprehension is how people understand sentences as they read (also known as sentence processing). Experimental research has spawned a number of theories about the architecture and mechanisms of sentence comprehension. Typically these theories are concerned with what types of information contained in the sentence the reader can use to build meaning, and at what point in reading does that information become available to the reader. Issues such as “modular” versus “interactive” processing have been theoretical divides in the field.
A modular view of sentence processing assumes that the stages involved in reading a sentence function independently in separate modules. These modulate have limited interaction with one another. For example, one influential theory of sentence processing, the garden-path theory,  states that syntactic analysis takes place first. Under this theory as the reader is reading a sentence, he or she creates the simplest structure possible in order to minimize effort and cognitive load. This is done without any input from semantic analysis or context-dependent information. Hence, in the sentence “The evidence examined by the lawyer turned out to be unreliable,” by the time the reader gets to the word “examined” he or she has committed to a reading of the sentence in which the evidence is examining something because it is the simplest parse. This commitment is made despite the fact that it results in an implausible situation; we know from experience that evidence can rarely if ever examine something. Under this “syntax first” theory, semantic information is processed at a later stage. It is only later that the reader will recognize that he or she needs to revise the initial parse into one in which “the evidence” is being examined. In this example, readers typically recognize their misparse by the time they reach “by the lawyer” and must go back and re-parse the sentence. This reanalysis is costly and contributes to slower reading times.
In contrast to a modular account, an interactive theory of sentence processing, such as a constraint-based lexical approach assumes that all available information contained within a sentence can be processed at any time. Under an interactive account, for example, the semantics of a sentence (such as plausibility) can come into play early on in order to help determine the structure of a sentence. Hence, in the sentence above, the reader would be able to make use of plausibility information in order to assume that “the evidence” is being examined instead of doing the examining. There are data to support both modular and interactive accounts; which account is the correct one is still up for debate.
(iii) Language production
Language production concerns how people produce language, either in written or spoken form, in a way that conveys meanings comprehensible to others. One of the most effective ways to explain the way people represent meanings using rule-governed languages is by observing and analyzing instances of speech errors. They include speech dysfluencies like false starts, repetition, reformulation and constant pauses in between words or sentences; also, slips of the tongue, like blendings, substitutions, exchanges (e.g. Spoonerism), and various pronunciation errors. These speech errors yield significant implication on language production, in that they reflect that:


Speech is planned in advance: speech errors like substitution and exchanges show that one does not plan his/her entire sentence before s/he speaks. Rather, their language faculty is constantly tapped during the speech production process. This is accounted for by the limitation of the working memory. In particular, errors involving exchanges imply that one plans ahead in their sentence but only about significant ideas (e.g. the words that constitute the core meaning) and only to a certain extent of the sentence.
Lexicon is organized semantically and phonologically: substitution and pronunciation errors show that lexicon is organized not only by its meaning but also its form.
Morphologically complex words are assembled: errors involving blending within a word reflect that there seems to be a rule governing the construction of words in production (and also likely in a mental lexicon). In other words, speakers generate the morphologically complex words by merging morphemes rather than retrieving them as chunks.
Psycholinguistics and sociolinguistics are coming closer to each other with the realization that merely grammatical competence is not enough, we acquire communicative competence too. Whereas psycholinguistics is language and mind, sociolinguistics is language and society.
The semantics is totally dependant on psychology. The psychology also assists in the syntax of a language. On some occasions, to know the reason of the phonological change, we have to take the help of psychology. It also studies the child psychology of mentally retarded people. The psychosocial treatment of the mentally diseased also depends on the specific type of speech. The origin and growth of a language are also the direct or indirect areas of psychology. The contribution of linguistics is inevitable even in the analysis of ideas. Psychology and linguistics are so deeply interrelated that a new branch of linguistics has come into existence with the name psycholinguistics.
In the end, one can say that Psycholinguistics, among other things, studies how a language is acquired or learned, and then used. In this case, it covers the topics of language acquisition and language learning,  language and brain, and bilingualism (as a result of learning two or more languages).